Calm before the storm, Government Shutdown 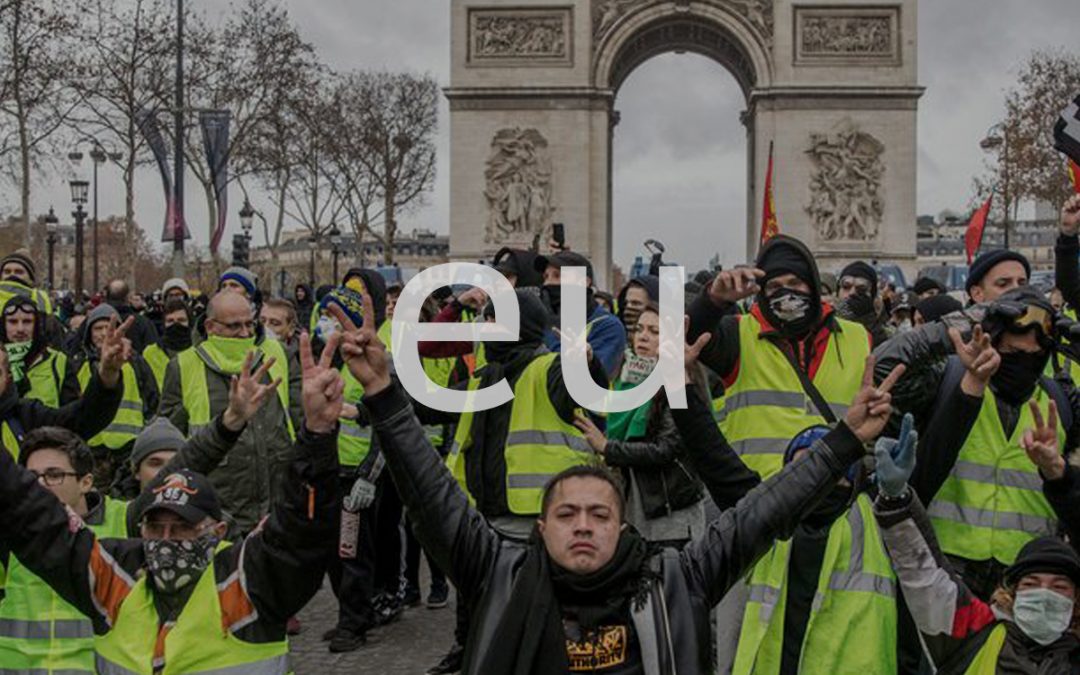 The calm before the storm, the grumbling of millions of American people, and the protest of a government shutdown.

Meanwhile, France is taking it to the streets.

And bringing entire cities to a standstill.

Poetic. And we are the ones who like to “fight for what is ours.”

American’s have always been the big kid on the play ground, teaching everyone how to play fair and nice.

Yet, we shutdown over a wall, a device used to help Trump remember parts of his speech because he wasn’t good at memorizing anything.

The wall was a gimmick used to help Trump remember to talk about immigration. He instead used it to hype his low IQ crowd. It stuck, now it’s going to help him win another election, and keep his 1% benefactors happy.

The only thing the president is good at, is reading from a teleprompter and wearing a suit.

In 2019, January, we are celebrating our 1st government shutdown!

We should be protesting but it doesn’t seem to be a high priority for our citizens. So, they have taken to social media.

Luckily, or unluckily, 800k government employees are going unpaid. These employees know exactly what to do to protest. It’s a good start…

But… is protesting what we need at this point?

We are protesting but is this what we need?

Is it too late?

Did we miss our chance?

Is this the calm before the storm…

It’s likely we will see this happen every time Trump wants his way.

Remember, the biggest voting class of people today are voting for someone that logically makes my brain hurt.

Here’s what everyone voted to keep in office, and this is what Americans are not really protesting very much against today…

Here it is… When Trump doesn’t get his way, millions of people starve.

The calm before the storm… That feeling when we know we pressed our luck, spent all the money, and shut it down. The reason all the media is going to show you a lot of other insane content, is to keep you from following the 1% billionaire class. These are the people giggling as we fight each other over emotional media.

Do you think we are going to protest our way out of the wall, 2 years after the election?

Good grief we need to open up or American history books, don’t we?

We think things like “a wall” will be a solution.

Boy are we wrong. A wall to the government is a symbol of dominance over the lowest IQ bracket in our country.

All at the finger tips of every politician that knows to outsource to smart people.

Census data, scraping web pages, paid data subscription, or using Facebooks illegal data harvesting tools too. Oh, and Facebook got away with this too, they did this 100% legally as of right now, they gave away your sensitive private data for years and now, all of a sudden, are completely immune to being fined or consequences.

GDPR does not seem to care about Facebook right now, they are scared to go to war with Facebook, but seems to be picking on Google as of this week.

But what does all this data have to do with the wall?

Well a wall isn’t exactly gerrymandering – but it is similar.

The wall is giving the uneducated, media fueled, or media enriched class of people, fear.

Fear and for those who support the wall, hope.

When you mix fear, and hope, you get American media.

The wall has become a tool to earn more votes and lure unsuspecting low IQ voters into a emotionally fueled rant on the internet.

Fake media is being pushed into the eyes of every home, every television around the United States is tuned into hear more about children dying

I like to call this current media fad, the calm before the storm, play with your emotions while bigger problems are relevant.

If you think these events are bad, or crazy, you have another thing coming.

We live in a world of “this is what they want you to see.”

The information is going to blur your vision when it hits the fan, this is not the event, these are not the big events, these are the light hearted events before the storm.

Think about the cause of the problem in America, or most countries.

Media has generated false narratives at every corner, and most of the world thinks the TV is the biggest invention of their life time, most of that world votes and the rest do not vote.

The youth have not shown up to vote, and still are coming in at very low numbers.

Even though the youth out number the adults, they still lack thought leadership that goes beyond pouring a beer on a Lamborghini.

Not knocking 50cent, rather I’m using 50cent as an example of a good thing gone bad. 50cent has every right to pour beer on his tax right off, but at the same rate – he could be telling his 22million followers about something that would progress their lives positively. But at the top of his game, this is as far as he has gotten. 22million fans and zero progressive thought leadership.

Yeah, 50cent gives money to charities as a tax write off, so that he can enjoy his free toys VS paying the government taxes. Giving money to a charity is a loop hole for rich people to skip paying taxes, making buying this Lambo at the end of the year, right before giving money to the charity, a smart investment in a depreciating asset.

They want you to be distracted by the “effects” today…

They want you to get excited about 50cent, his 22million followers, and his thought leadership towards spending money and partying. He’s the perfect tool for rich Americans to distract everyone.

They want you to get excited about the football game.

They want you to focus on the latest Netflix series.

They want you to ignore the fact that the Government is the cause of the problem.

They are spending a lot of time painting a different narrative.

The cause is right under your nose.

But you’re busy with all the distractions.

It’s the label of every show on TV, “Government… Shutdown.”

The Government failed, and if you think it shutdown because it needed a wall, then you don’t know how the government works.

And that’s the major issue we have today, we have a group in the governing body that does not know how the government works today.

But the effects make our emotions perk up and say WTF is this… and share, click, impressions…

What’s next with big media?

The big storm that catches everyone by surprise is coming down the pipeline. You know it’s coming, so stop kidding yourselves that this is as bad as the news will get. It’s likely we will have another 4 years of this because when it came time to vote again, people simply did not show up and vote.

So, do you think we are ready?

It’s about that time. It’s time for the war machines to cash in.

Did you know we sent nearly 60 missiles at a country?

Did you know the president owns a part of the company.

Did you know that they could not tell where most of the missiles landed?

Did you know that other countries said our attack was ineffective.

According to the claims of Russian defense ministry, the “combat effectiveness” of the attack was “extremely low”;[45][46] only 23 missiles hit the base destroying six aircraft, and it did not know where the other 36 landed.[47][48]

As a society, we just gave a lot of money to a small, tiny percentage of people and took away vital services to help those who need the help.

The government shutdown is the most ironic action any president could take to build a wall but the national security does not seem to be a problem in the eyes of the current president.

The government being shutdown is a massive threat to our national security on a thousand different levels.

That’s the problem. Cause or effect? National security under threat, 800k people without a paycheck, and more numbers to come…

Always… more we will find out eventually..

So much of it most people will never comprehend.

It’s about that time and it’s easy to forecast these events.

When was the last time we has a major war, school shooting, unexplained event… It’s about that time.

I hope my family and I are far from these events. Yours too. 2019 is going to be a bumpy road.

Having a baby, we both know when we are pushing it too much…

Like when we both know we are pushing the limits of his nap time or his baby patience.

It’s cool, I’m also not very patient as a person.

800k people not being patient is about to be very different.

People are currently protesting outside of McConnell’s office.

But what does that mean?

If they can’t control the narrative, what does that mean for our near future. Remember media is for profit, paid news…

So what is there we can take for truth?

800k is a big number. Not to mention the hundreds of thousands of contractors not being paid. These people play vital roles. And now can’t feed their children.

People, 800k are now being starved from work. Paychecks. Bills.

Food is going to be something people will consider protesting about.

In some countries now, there’s a lot more protesting happening than media is willing to admit.

You can search about what’s happening with yellow jacket protestors…

But before you leave my blog…

It’s 1/24/19 – I predict something very big is going to happen during this shutdown. Be safe. I would not recommend flying because it’s clearly a completely unresolved issues with the American government.

Something much bigger than the current wall conversation.

The wall is a media fueled agenda, it’s good for votes, and a wall has never been a solution.

It’s for profit. Not for the people.

The calm before the storm. This year is going to get bumpy.